England play their first game in the 2014 World Cup in Brazil tomorrow against Italy.  For the first time in a long time I am actually hopeful about the England team and looking forwards to seeing them play in a major tournament.  In the past I have hoped they would win, sometimes even expected them to do well, but in my heart of hearts knew they it was all going to end in tears.

This time, though, I have no real expectations of a win, and I wouldn’t even be surprised if they got knocked out at the group stage.  I am, however, excited about the young squad we have and its potential over the next few years to improve, so this World Cup is more about having some fun and learning about tournament football for them.

But as I said, in the past it has been different.  Looking back at previous World Cups it is interesting how they act as landmarks in my life, helping me to remember who and where I was. 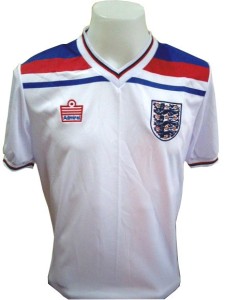 The Best England Kit Ever

I was 8 at the time of this World Cup and it is the first one I have any memory of.  I only really remember 4 things about it, though.    The first is the song that the England team sang before heading off to Spain.  I think it was the first song I ever bought.  Another memory is of Bryan Robson scoring the fastest goal ever at a World Cup with a header against France in the best England kit ever.  Third, I remember Brazil losing to France on penalties and the fact that I watched it at a cricket pitch after watching my uncle play.

The fourth thing I remember is that it was the time of the Falklands conflict and there was a lot of hostility towards England from various teams.

I remember much about this Word Cup, but the one of the things that sticks out the most was the Kinder Surprise chocolate eggs that had special toys celebrating the tournament.  The best toy was the one of the mascot, but it was very difficult to get so you had to buy lots of chocolate eggs.

I obviously remember the game with Maradona’s infamous Hand of God goal and the famous best goal ever in a World Cup.  I specifically remember watching the Hand of God goal and hearing the commentator saying the England fans were appealing for offside.  I didn’t realise it was handball, but I did know it wasn’t offside either because an England player had been the last one to touch the ball.  This was the first time I realised that commentators were rubbish.

This was the first time Ireland had qualified for the World Cup and so lead to some soul-searching about whether to support them or England.  I chose England, just, and was rewarded with the best display in my lifetime.  It culminated in a semi-final appearance with Gazza in tears.  I remember that England should have beaten Germany, but we lost on penalties.

I still hate thinking about that match.

This was the last time I have been in England to watch a World Cup when we have been taking part in it.  This is quite a scary thought.

England didn’t qualify for this tournament, so I was thankful for my Irish roots as this time I was fully behind the men in green.  I remember a near riot at Glastonbury as there was a rumour they were going to show one of the Ireland games on the screen next to the main stage while a band was playing.  They didn’t show the game and the fans who had gathered let the band know in no uncertain terms what we thought of them.

This event provided one of my best memories of any World Cup when Ray Houghton scored his wonder goal against Italy.  Although it was an amazing goal it, it isn’t this that was so wonderful, but the sight of my granny leaping out of the chair when he scored.  I had never seen her move so fast, or jump so high as that day.

I was in Taiwan for this World Cup, and so spent a lot of time in one of the few pubs that was showing any of the games.  The game we lost to Argentina was one of the best I have seen, and yet again my memory is that England should have won.  The pub we watched the game in was packed with England fans and, due to the time difference and the game going to penalties we rolled out of the pub at about 6am.  I had a class at 10am and vividly remember seeing my boss as we were leaving the pub and him warning me that I had better turn up to the class.

I was in Brazil for this World Cup.  It was quite a lonely one for me because the time difference, and the fact that I didn’t know any other English people in Brazil at that time, meant I watched most of the games on my own.

I watched England lose against Brazil with a couple of Brazilians.  I nearly beat the crap out of one of them when Brazil scored and he jumped up and down screaming in front of my face.  The only thing that held me back was the fact that he was twice my size and was pretty good at judo.  Otherwise…

I was in Brazil for this one as well, and it was slightly better because I knew a couple of English people at that point.  It was my first World Cup as a married man, but that didn’t stop me enjoying myself.  I had high hopes for England in this World Cup, but as usual, they were dashed through Wayne Rooney getting himself sent off and then once again messing up the penalties.

One day I will watch England win a game on pemalties in the World Cup.  I may need to live well into my 100’s to manage it, but I refuse to die until we have done so.

I was in Rio de Janeiro for this one, but surprisingly I don’t really have any strong memories about it.  By this time I was starting to fall out of love with football in general because of issues like the importance of money.  I had also lost any hope whatsoever that England would ever win anything in my lifetime, especially as they had such an average team.

I do remember the noise of that bloody vuvuzela.  Surely it has to be one of the most irritating things ever allowed into a football stadium. Which brings us up to date.  My first World Cup as a dad!

I am quite sad that my son is still only 2 years old because he is not going to have any memories at all of having the World Cup in one of hs own countries.  As things stand, England aren’t going to get to host a World Cup because FIFA seems to hate them and I don’t think Brazil will be queuing up to go through this painful process again.  For future World Cups I will make sure my son has great memories to act as landmarks in his own life.  Assuming he gets into football and that FIFA doesn’t kill it.

By the way, some of my memories might not actually be totally 100% correct.  I have decided not to check them because I like my memories as they are, so please excuse any mistakes.

This blog piece is a part of the Multicultural Kid Blogs series on World Cup for Kids.  If you would like to follow the World Cup from the point of view of kids around the world then please go and check out the site.  There are bloggers from all of the competing countries as well as articles about Brasil and how to get kids interested in sport.

What’s it all about?

An expat living, working and bringing up a bilingual family in Curitiba, Brazil.
Follow @hoftheh